We have raised over two hundred thousand pounds to build a purpose built ‘Outdoor Learning Centre to facilitate and expand the delivery of existing ‘Outdoors Learning’ education here at Rowdeford School. From the beginning of the project and the expansion of the initial ideas the intention is to create an exemplary facility that extends its work to involve the wider community, visiting schools and offer training; becoming a Centre of Excellence in Outdoor Learning.

The original ‘Kennels’ building (formerly school farm dairy & animal housing) was in  a state of dereliction and we are sympathetically restoring the building  as a simple, functional, weatherproof space repairing brickwork, timber and roof coverings. The intention is to be ‘minimalist’ in the refurbishment and within the restored spaces insert ‘pods’ or ‘self-contained’ units of free-standing accommodation creating storage and toilet facilities. This maintains the structure very closely to its 19th C origins and allows for integration of habitats e.g. swallows, bats. (we already have a Tawny Owl using the facility as a roost.)

Access to the building will be the existing routes through the school grounds. Accessibility for people with disabilities will be a key consideration and the school already has good access arrangements within the woodland for teaching at the moment.

A new access track has been constructed already to the north of the site thanks to a generous contribution from Hills Waste Ltd and other funds that the Trust had raised. This will be recognised by a plaque at the Centre that was presented at the naming celebrations by Mary Hardwidge Grants Officer from Community First and Peter Andrew Group Director of Quarry Products The Hills Group. 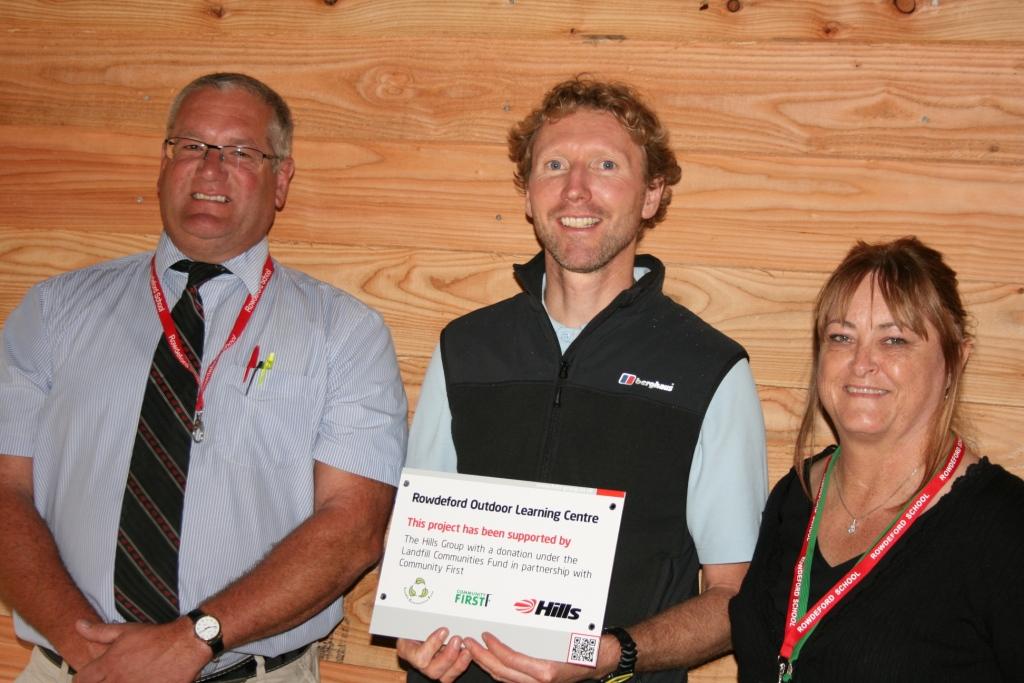 Building work has begun and is still on-going but will be finished during the school holidays. However, you can already see the Centre taking shape.

It should be mentioned that before the professionals moved in a significant amount of work was undertaken by volunteers. Thanks should be given to the Teams from Lloyds Bank, Royal Wootton Basset School, a team of Rowdeford Charity Trustees as well as some pupils from the school.

Learning outside the classroom is recognised by Rowdeford School as an essential way of bringing teaching and learning alive across all areas of the curriculum. The learning in real and inspiring environments increases levels of achievement in academic, personal and social abilities. Bringing learning alive in a wide variety of outdoor environments increases students’ motivation and their ability to transfer learning from the school to the wider world. At Rowdeford students work within its heritage setting to integrate traditional horticulture, kitchen gardens, estate management and woodland management skills and crafts into its curriculum.

The School does not have the capital to finance increased building space such as the Outdoor Learning Centre, it is the Rowdeford Charity Trust who help with this through a whole suite of fundraising activities. In the past the Trust has been extremely successful in raising over one million pounds for projects such as the Arts Centre and much more.

This project has been supported in many ways; the Garden Fair of course is an important part of the local events calendar and raises many thousands each year. On top of that we have had Burns Night parties, Film nights, Operas and many other fun and profitable events. We have one of our Trustees, Maggie Moore, running the Great North Run and also Alex Husk undertaking the Iron Man Challenge.

On top of that we have written to and spoken with many charitable organisations who have been very generous. Most have been named on a plaque that will be on display in the Centre as a modest but heart felt way of recognising their support. We are so grateful for their generosity.

There are two on the plaque listings that should be mentioned specially.

One is the Wooden Spoon Trust. This active Rugby Charity was an early supporter of our Project. Gareth John, the Chairman of The Wiltshire Wooden Spoon, visited the School and remained a constant advisor, supporter and friend in leading the way in pledging a significant grant. Gareth could not attend as he is away but Chris Elias of Wooden Spooon was able  to come so we could, through him thank them for their support. The School too wished to recognise the significant impact of Wooden Spoon’s involvement with the project by naming a new annual award – The Wooden Spoon Eco Award. Barry will present this award to the Student that:

demonstrated passion, integrity, teamwork and fun in every aspect of outdoor learning at Rowdeford School.

This the first year will go to – Kieran Ballard and Chris presented this award at the new Centre. 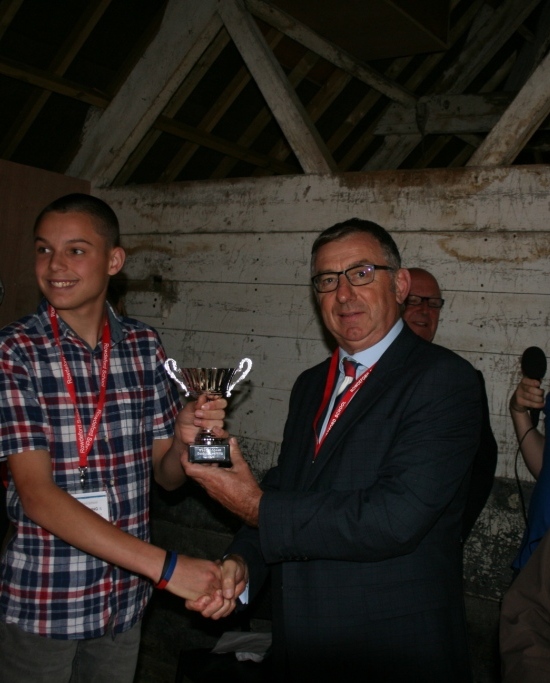 The Second fundraising mention should go to a pupil who attended Rowdeford once a week on it’s Plus Programme . His name is Jamie Rowcliffe and he became our narrator in a video we produced. He was so taken with the project that he began raising money for the Trust with his own appeal. His voice and his face was important to Trust for it represented the pupils.

Jonny Grew Chairman of the Rowdeford Charity Trust had the task of bringing things together and welcoming and thanking everyone who came to the celebrations. He took time to talk about the journey that was undertaken to get to where we are today with the building works underway. He acknowledged that although significant sums have come from Charitable Trusts these would not have been possble without the profile and work of many others. He mentioned 'Burns Night' events, Hat lunches, the fantastic annual Garden Fair, Opera Evenings and  Film evenings the list is long and nothing would have happened without the supporters at the School.

Jonny announced that The Centre is to be named in honour of the retiring Headteacher Ingrid Sidmouth. She has been very much the driving force behind so much within the School so it is only fitting that her name should be used for the Centre. However he was not undertaking the naming this was to be done by three pupils, Jamie Rowcliffe, Lauren Booth and Jake Millington . Lauren and Jake read a poem and Jamie led the naming.

Pupils from the green team then brought in the sign for all to see.- 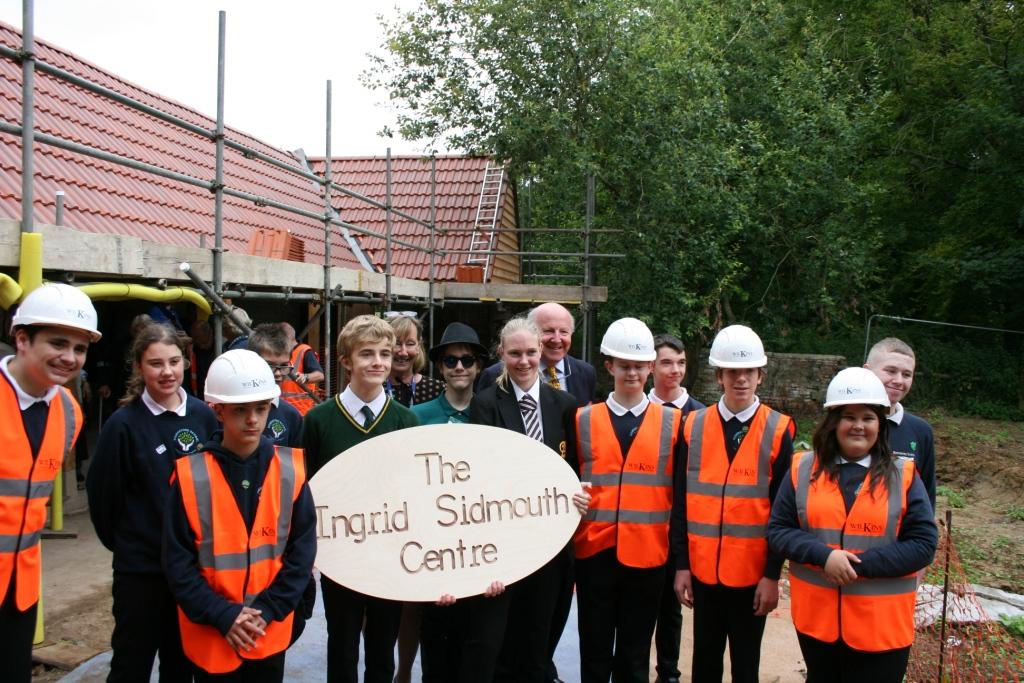 Ways to Donate & Sponsor Us

Learn how you can fundraise for us, give a one-off or monthly donation via our JustGiving page

Raise money each time you Search the Web through the Every Click  website, shopping bar or mobile app. With over 3,500 retailers including Amazon, eBay, John Lewis and Expedia, there is no extra cost to you!

We have done it !